Threats faced by the Bolivian River dolphin A steady decline in the population of the Amazon River Dolphins over the past two decades has been recorded in Brazil. For example, the population was halved every 10 years in the Mamirauá area in north western Brazil.

As for the Bolivian Bufeo, it has a smaller population size. This makes it extra vulnerable to a number of threats, with a potential to drive the species to extinction in the long run. Recently, the species has been recognised internationally as Endangered under the IUCN Red book (3). At the national level, the species is still listed as Vulnerable under “The Red Book of Threatened Vertebrate Fauna of Bolivia” (4) published by the Ministry of Environment and Water (MMAyA) of the Plurinational State of Bolivia. 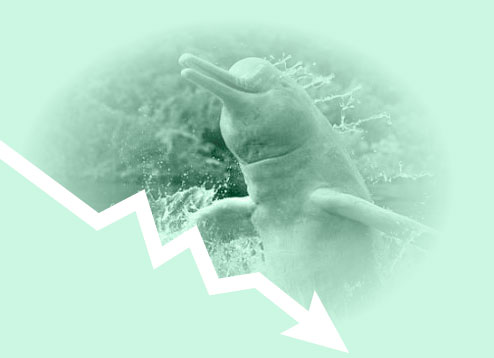 Hydroelectric dams create a physical barrier between upstream and downstream dolphins, leading to population fragmentation (5) (6) (7). This can aggravate the decline in the Bufeo numbers as smaller groups of isolated dolphins can quickly crash. In Brazil, a group of dolphins are trapped between the Jirau and Santo Antonio dams.

The dolphins could also be affected by changes in their floodplain habitat as a consequence of upstream sediment trapped by dams. The dolphins may also suffer from a lack of food as a result of dam construction as they primarily feed on migrating fish species.

Mercury accumulation in the river

Mercury released from artisanal and industrial gold mining is introduced into the ecosystem of the river. In Bolivia, gold mining is most common in the upper Madre de Dios basin (upstream of the distribution range of dolphins) and in the upper Iténez. Methylmercury accumulates and biomagnifies substantially in the Bolivian River dolphins as they are top predators in their freshwater ecosystems (8).

Conflicts between fishermen and the freshwater dolphins arise from resource competition for fish. In Bolivia, bufeos are accidently entangled in fishing nets and gear. In some occasions, they are intentionally hunted by fishermen as they are sometimes used as bait in the fisheries of scavenger fish such as the “blanquillo” (mota in Colombia, piracatinga in Brasil) (Calophysus macropterus) (9) (10) (11) (12). Overfishing can also deplete food resources for these cetaceans.

1. The National Plan for the Conservation of the Bolivian River Dolphin has marked the following milestones: